TWT are often asked to create a piece of theatre for a very specific project/commemoration/character or event. We carefully research and then decide on the style best suited to the particular audience involved and the length of the performance.

We then liaise with the client to make sure our concept fits their needs and then get writing! Quite often the play may only be performed over one weekend. We are lucky to have a pool of talented actors and musicians to draw from. Once we get the go ahead, we cast from available talent.  We normally rehearse at speed over one or two days. These projects are fascinating, really doing what we set out to explore – the lesser known stories of history. 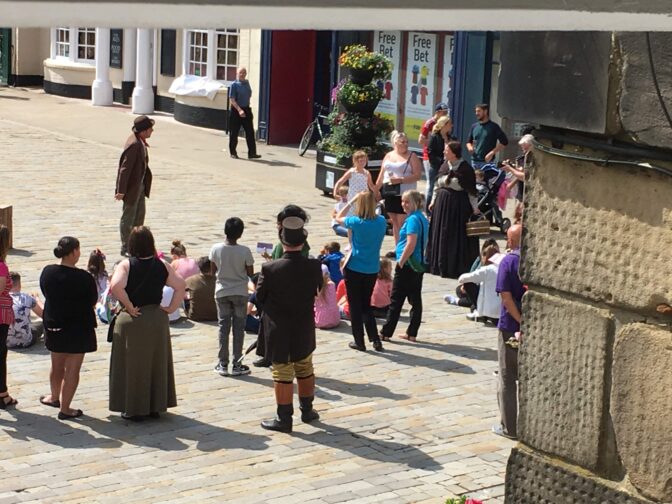 Potwallopers! When we were approached about creating a piece of theatre celebrating the first election to use the secret ballot, to be performed in the town square of Pontefract, we were delighted. We wanted to tell the story as if people were present in the run up to the election, and make them question if the secret ballot was a good idea, by having one of our characters talk about what went before. We also wanted to include the story of Mrs. Josephine Butler, a feminist and campaigner for women's rights, who used the Pontefract by-election to publicise her efforts to repeal the Contagious Diseases Act. The day was a great success, telling a story that many Pomfretians didn't know in an accessible and dynamic way and making the audience consider the process of how we elect our representatives. 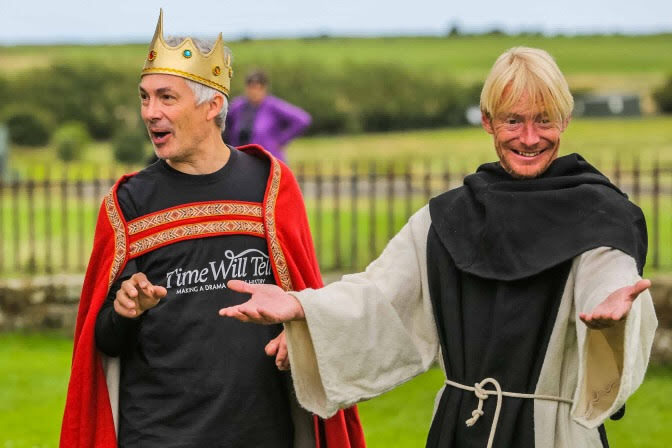 Drawing on the tidal nature of its isolation, TWT told the lesser known stories of Lindesfarne Abbey from the island's discovery to the search for the Abbey's possible hidden treasure in the C17th. A cast of three, minimal props and lots of costume changes took the audience on a journey through the Abbey grounds and history without mentioning the Vikings. Alright, nearly without mentioning the Vikings! Our main question was "Is living on an island a good or bad idea?", with various historical inhabitants of the Holy Island giving their views. 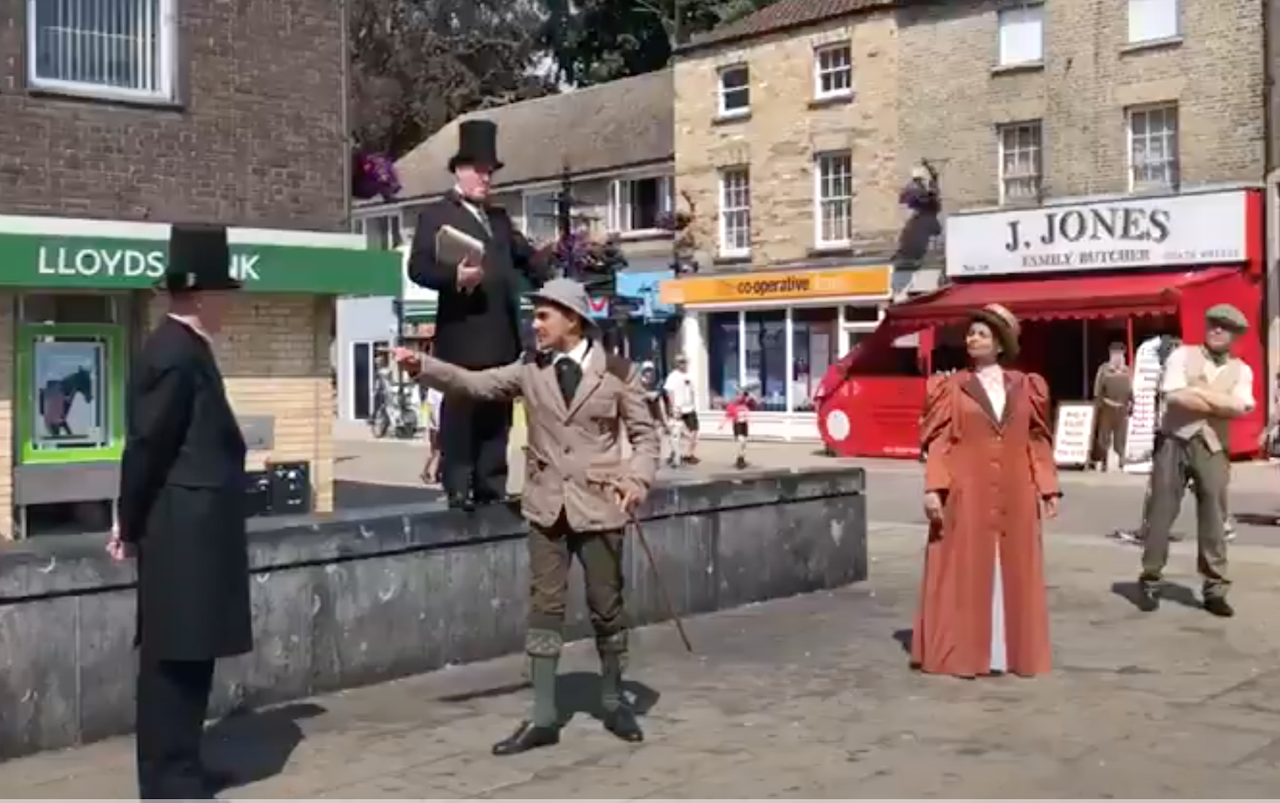 In collaboration with the Essex Cultural Diversity Project we were thrilled to be asked to create a promenade play in Thetford as part of the Festival of the Punjab, telling the story of the family of the last Maharajah of the Punjab, Duleep Singh, who, after his deposition, came to England and lived at Elvedon Hall near Thetford. With a cast of six we told his incredible, but ultimately desperate, life story through the eyes of his son, Frederick and daughter, Sophia.

An Affair of No Little Art/ A Life in Bloom 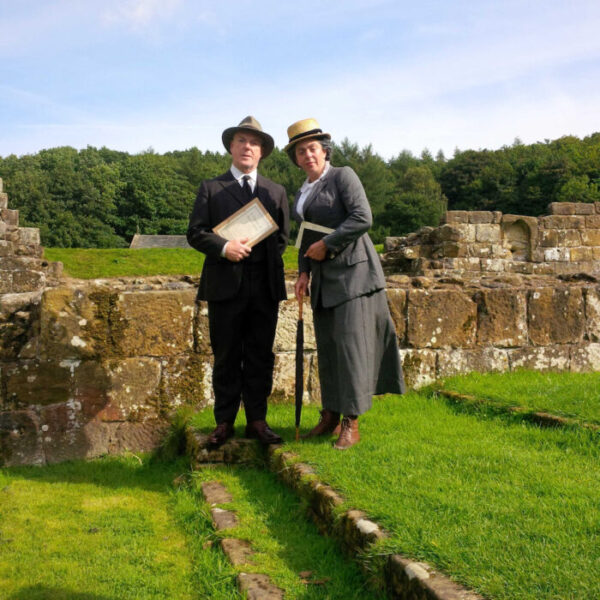 When English Heritage asked us to create a play about the Mount Grace Pageant of 1927 we didn't realise how much we would fall in love with the house there and the story of the Bell family. Particularly Gertrude Bell, a polymath who deserves more recognition for her incredible life and achievements. Our first play told the story of the creation of a History Pageant by Lady Florence Bell, the second told the story of the life of her remarkable daughter Gertrude. "A Life in Bloom" drew heavily on Gertrude's correspondence with her mother on the subject of flowers, as the gardens at Mount Grace had just been replanted.

The Way to the Stars 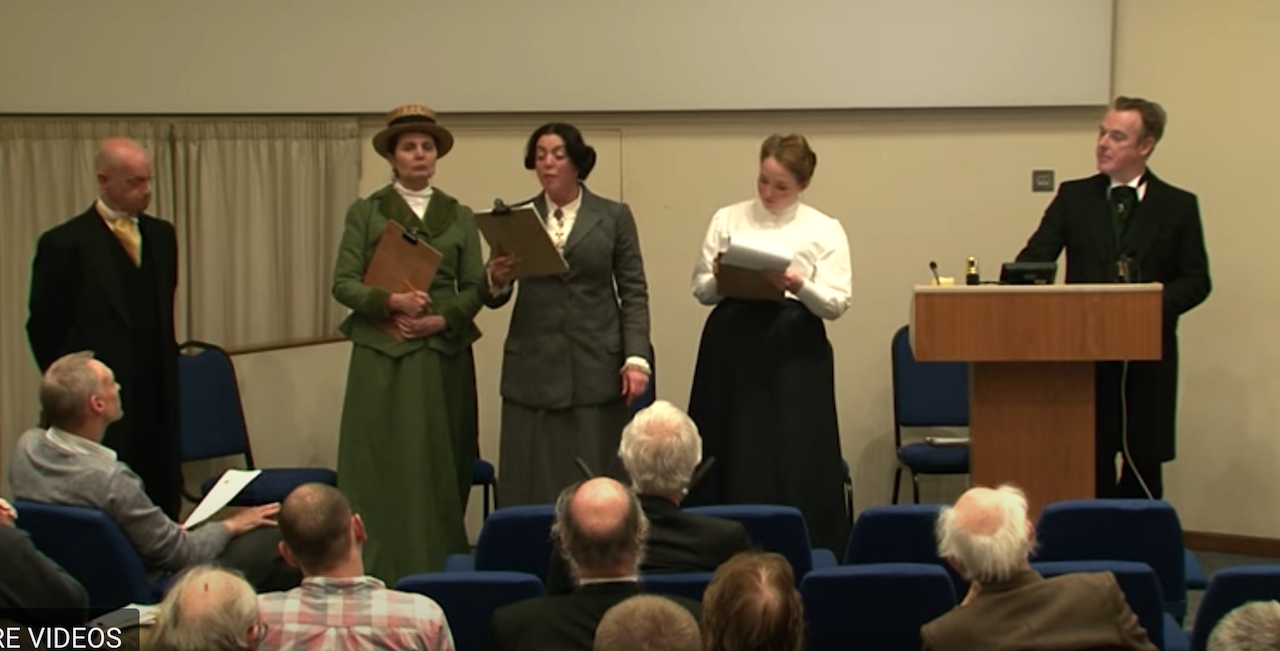 The Royal Astronomical Society asked us to celebrate the 100th anniversary of the society admitting women astronomers as fellows in 1917 through a play. The Way to the Stars told the story of women in astronomy through the ages, the struggles they faced and the contribution they made before they were finally given the recognition they deserved. Performed as part of their conference, the play was enthusiastically received, especially the "Song of the Lady Computers".

The Pageant of Bloody Pomfret 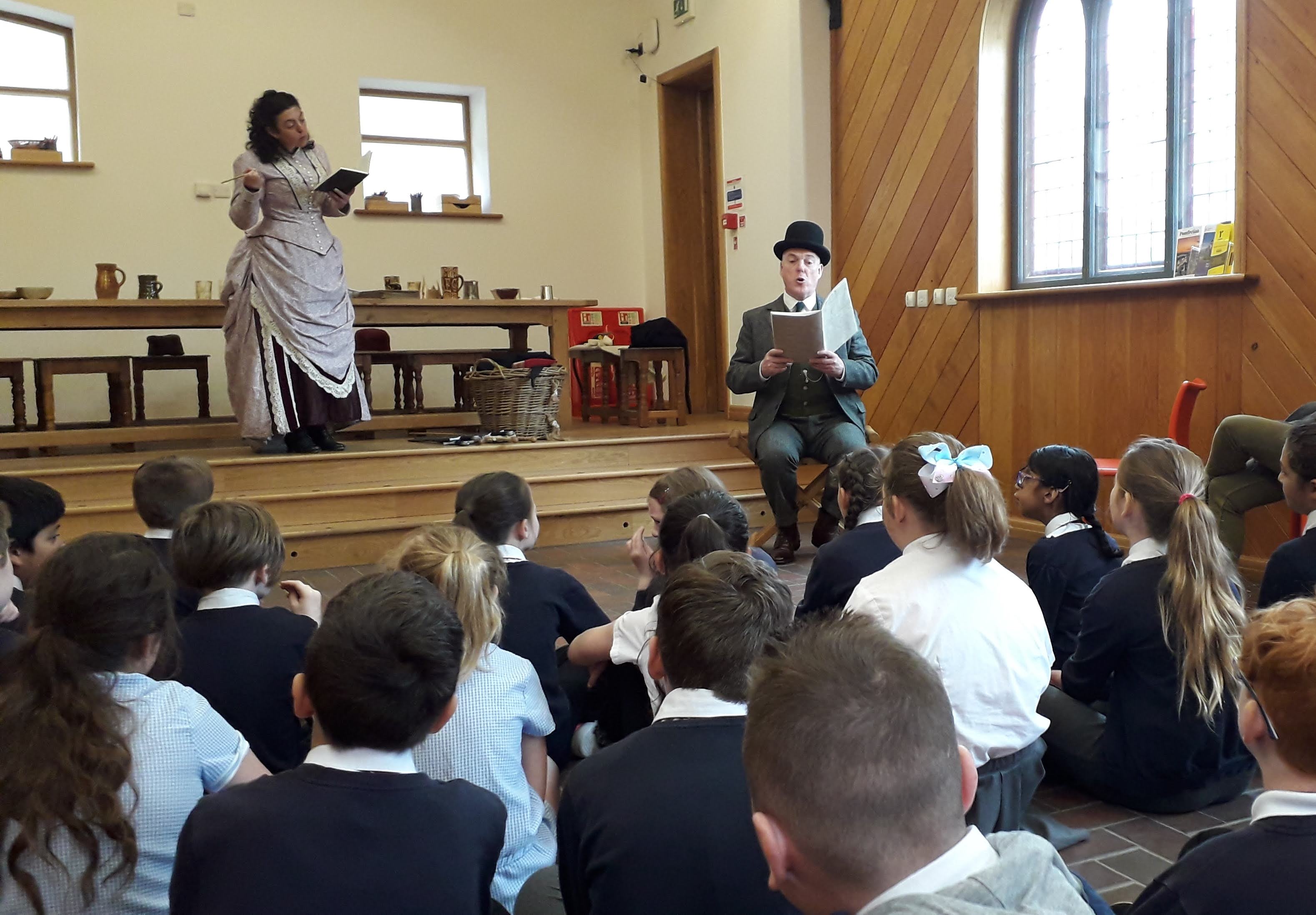 Pontefract Castle commissioned us to produce a piece on the history of the castle for school groups. "The Pageant of Bloody Pomfret” is set in the late C19th/ early C20th, a local actress has been given the job of creating a pageant celebrating the castle's history, overseen by her brother, a local historian. There are interruptions from a Dr. Watson, and a certain famous detective. Throughout the piece, the school group are called upon to recreate famous scenes from the castle's history, and to consider what the truth of King Richard's murder might be. 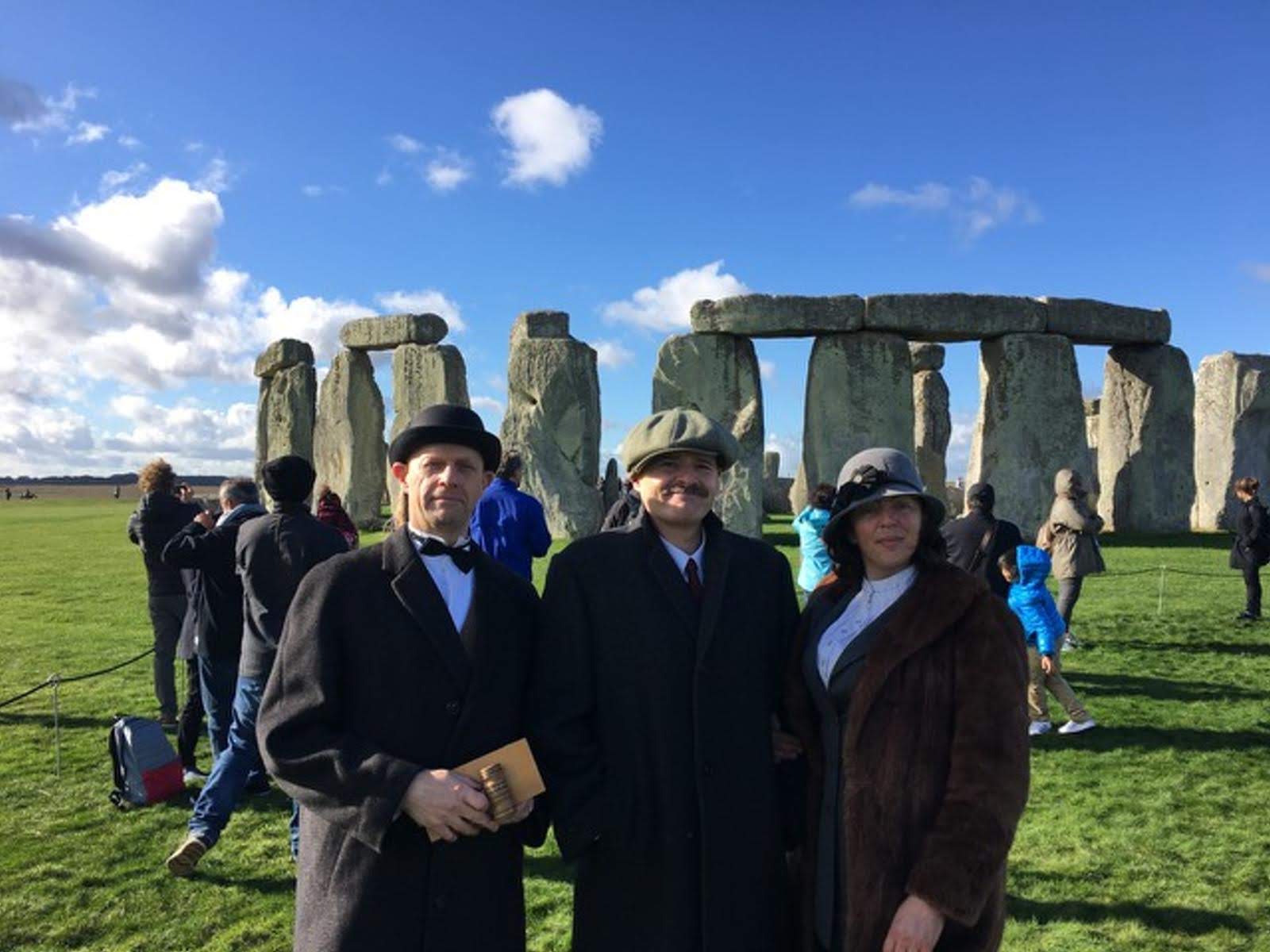 TWT have been fortunate enough to perform four plays at Stonehenge; one on the auction of Stonehenge in 1915, one on the bequest of Stonehenge to the nation in 1918, one on the history of Stonehenge from construction to the present day and one on the heritage and preservation of this unique prehistoric monument. Each one has had a different style, from documentary recreation to a more light-hearted touch. 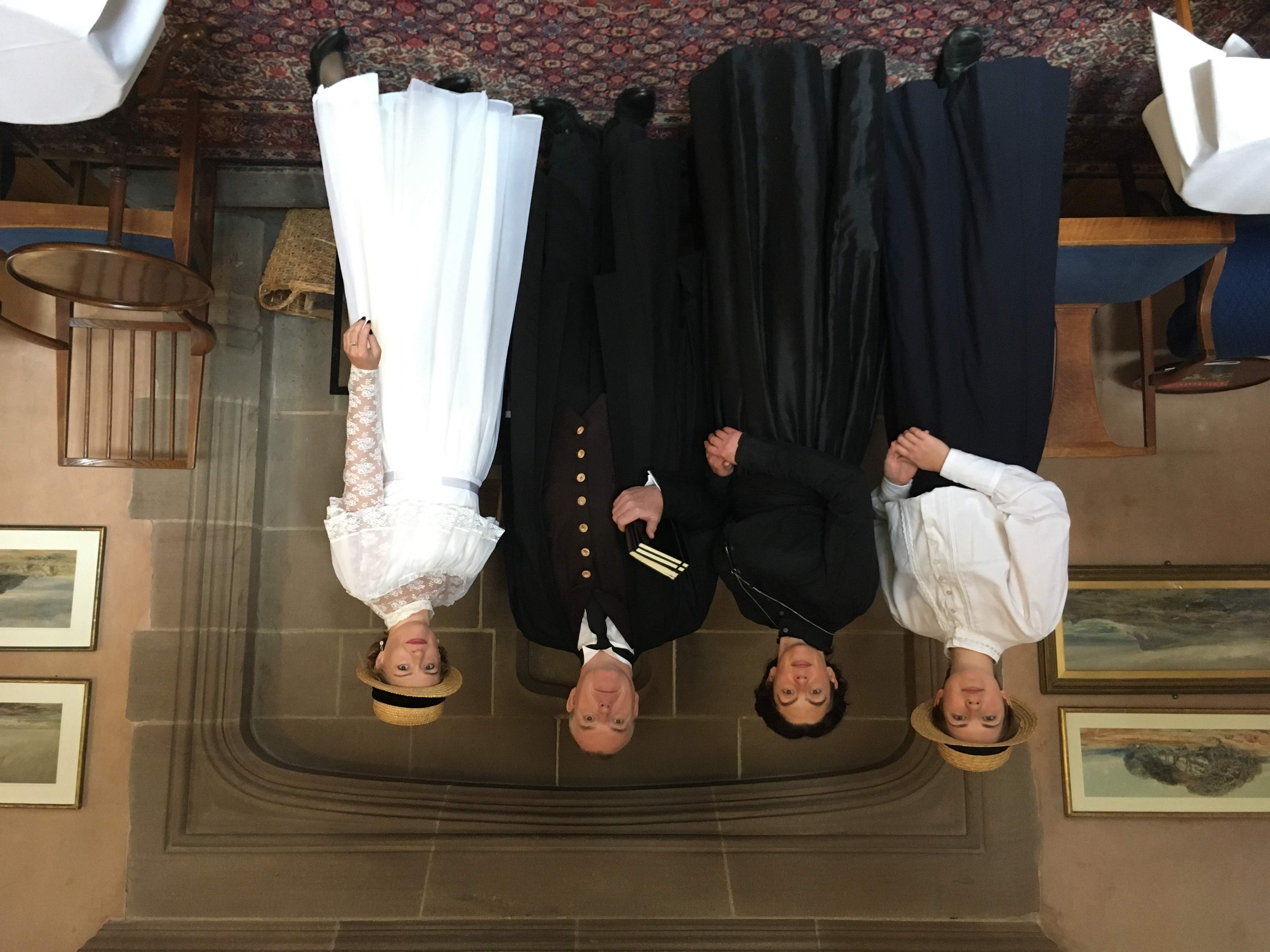 We were thrilled and honoured to be approached to create a play and additional characters for the celebrations of the 150th anniversary of the founding of Girton College, the first all woman college teaching and examining up to degree level. We spent two very pleasant days with the staff of the library researching from an abundance of material on the history of the college. ‘That Infidel Place’ covers the history of the college through the words of the founders, the songs of the students and the deeds of those who made Girton a significant milestone in the history of education and feminism, we had one of those magical afternoons when what we did connected directly with our audience. Even better, we were invited back to perform the play again! It was truly one of our favourite experiences, because it inspired us! 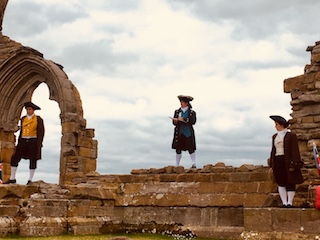 Building on the style of our most successful and long running show, "Dracula", about to celebrate its seventh year at Whitby Abbey, TWT were asked to create a play about Whitby's most famous son, Captain James Cook. This was an hour long promenade in which the audience were cast as the crew of Cook's ship as it made its circumnavigation, meeting with all the adventures that they had on this three year voyage. 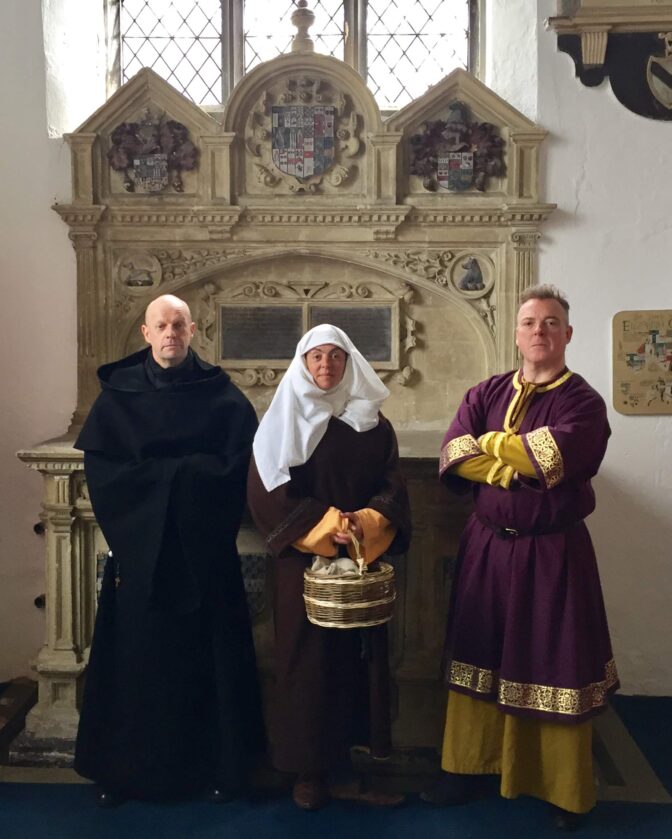 We created a site specific play about St. Martins church, one of Norwich's beautiful flint churches, looking at its history from Saxon to Victorian times and taking our audience on a journey around the church interior. 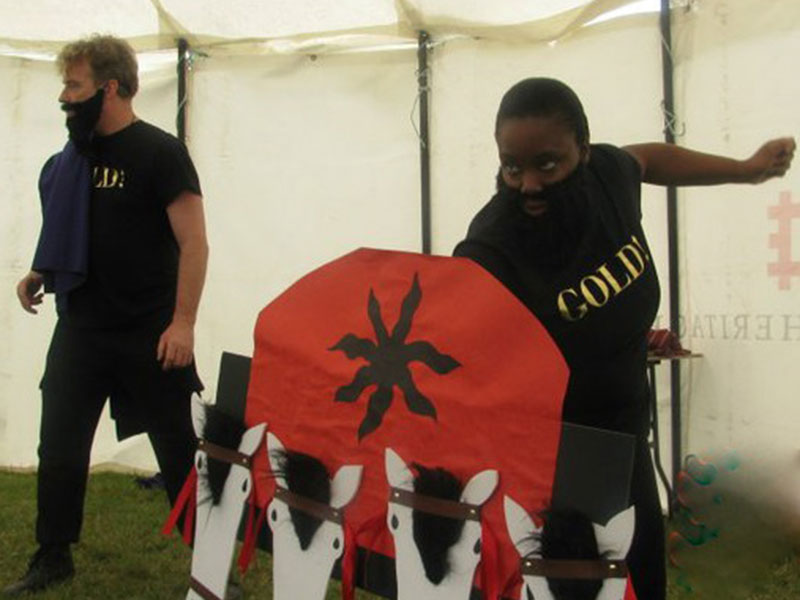 In 2012 our play Gold! was performed to celebrate the Olympics. A history of this iconic sporting event from Ancient Greece to the London Olympics of 1908 and 1948, we recreated the bloody violence of the Pankration, the heartbreaking marathon of 1908 and the Austerity Olympics of post-War Europe in a fact filled guide to how to become an Olympic athlete and gain the coveted Gold! 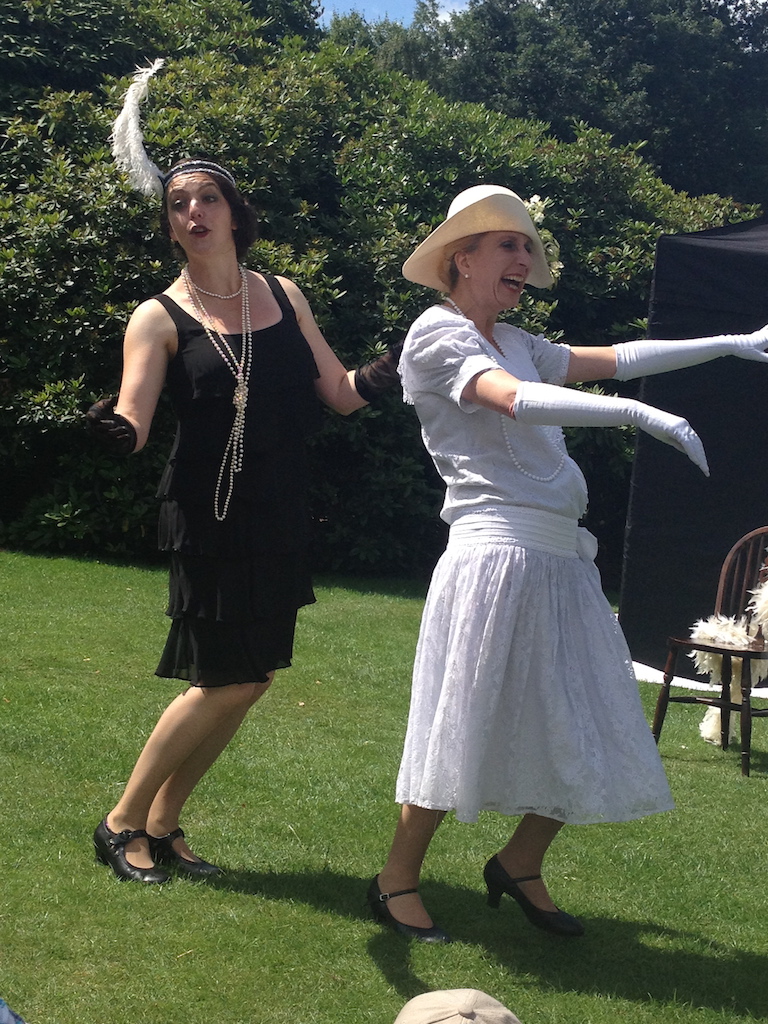 To celebrate the anniversary of the Iveagh Bequest to Kenwood House, English Heritage asked us to create a play. We came up with a story of a distant cousin of the family trying to get a famous playwright of the day to help her salvage her flapper reputation. Unfortunately a case of mistaken identity leads to a succession of frustrated plans, all performed in the style of a Noel Coward play. 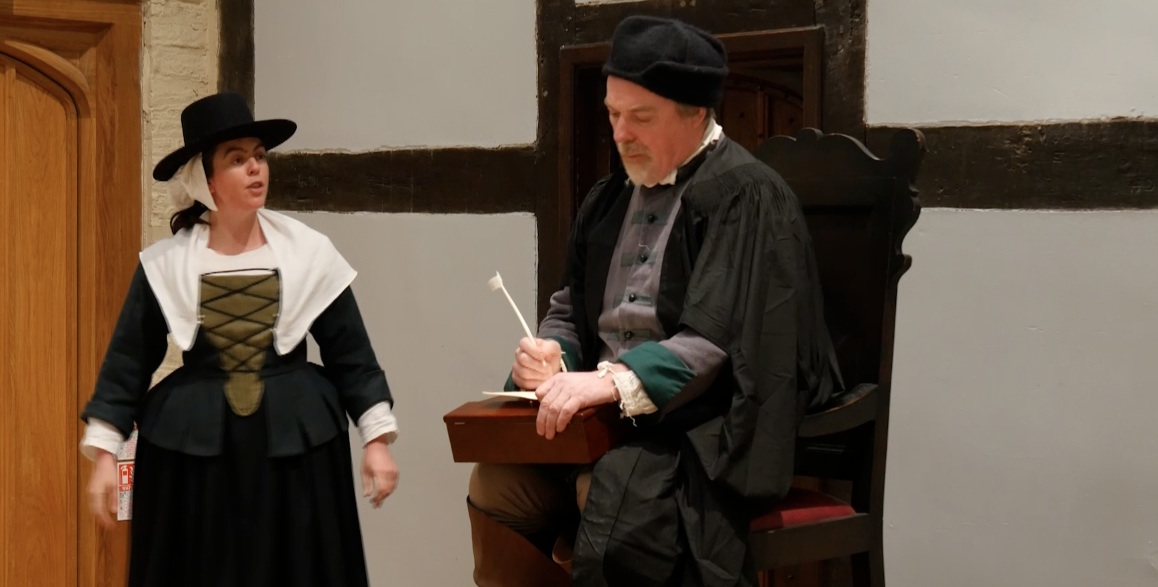 Commissioned for the opening night of an exhibition at the Newark Civil War Centre, this play told the remarkable story of how Parliament tried to encourage recruits by offering them a pension if they were injured or a payment to their dependents if they were killed. A landmark in the history of women's rights, the play explored the touching story of widows petitions to Parliament to seek compensation for the loss of a husband, son or father. 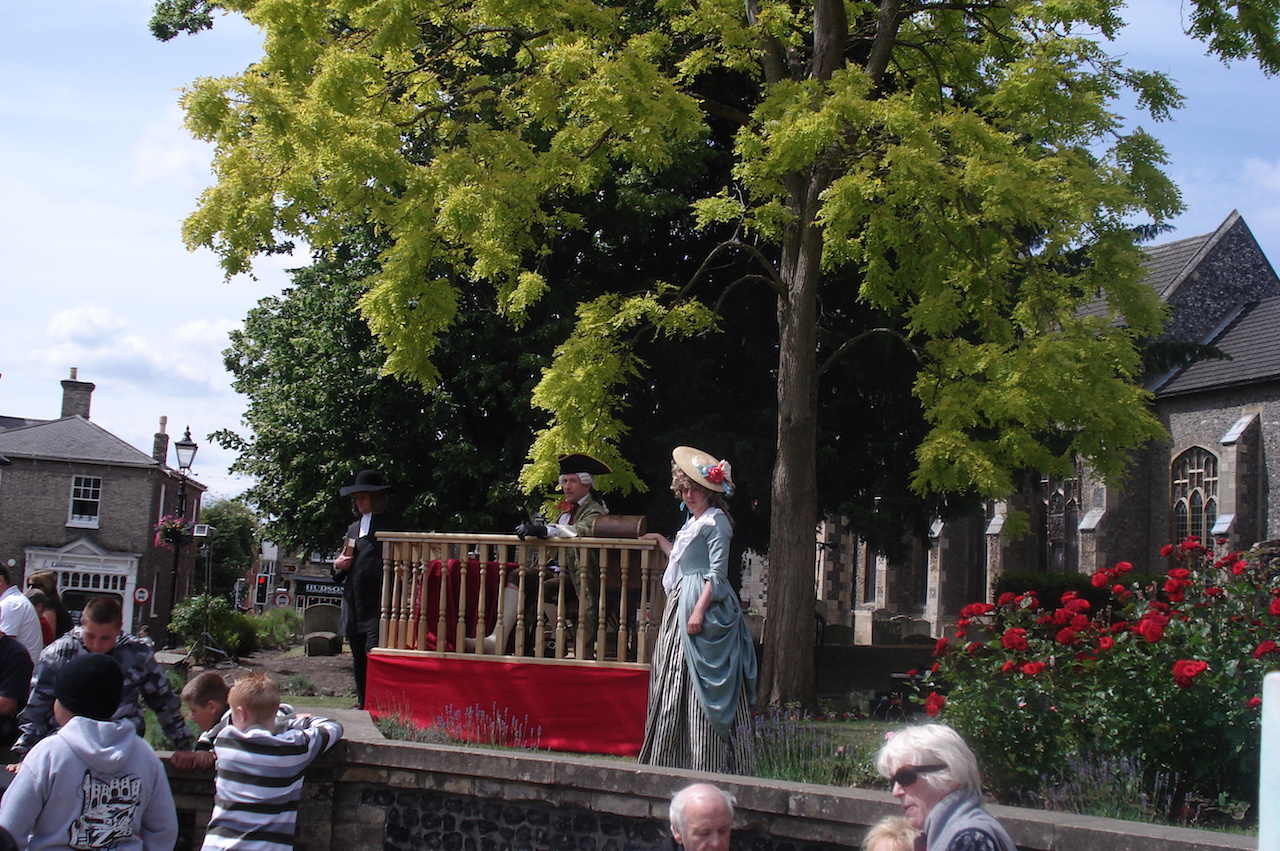 As part of Thetford's Thomas Paine Festival we were commissioned to create a play looking at the reality of the political world of the 1770s complete with Rotten Boroughs and a readily manipulatable electorate through a by-election in Thetford that displayed the worst excesses of corruption. A promenade piece that moved down King Street, the audience were brought face to face with two rival candidates desperate to secure their vote. "The King's Shilling" looked at the difficulties of trying to recruit fresh blood for an unpopular war and the efforts some recruits would go to to escape a difficult situation. 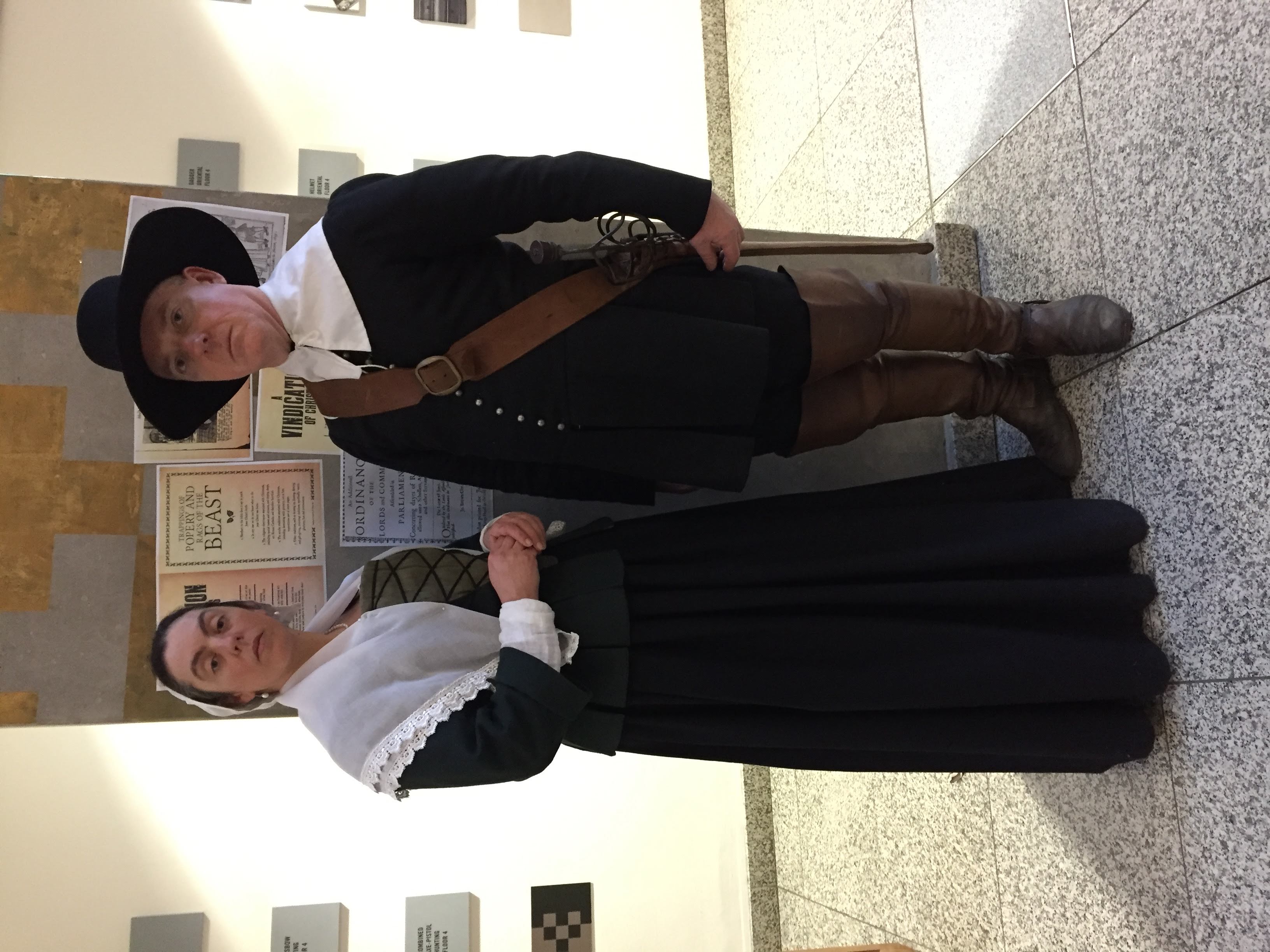 Commissioned by the Royal Armouries, Leeds and taking as its theme the efforts of Puritans to change the nature of Christmas celebrations "Christmas is Cancelled" pitted a group of Royalists with a determination to enjoy all that Christmas has to offer, against a band of Puritans determined to thwart them, with the audience caught in the middle. An activities based day where people learnt about C17th life and attitudes whilst enjoying being caught up in a crazy plot.

Strange Goings on at the Big House 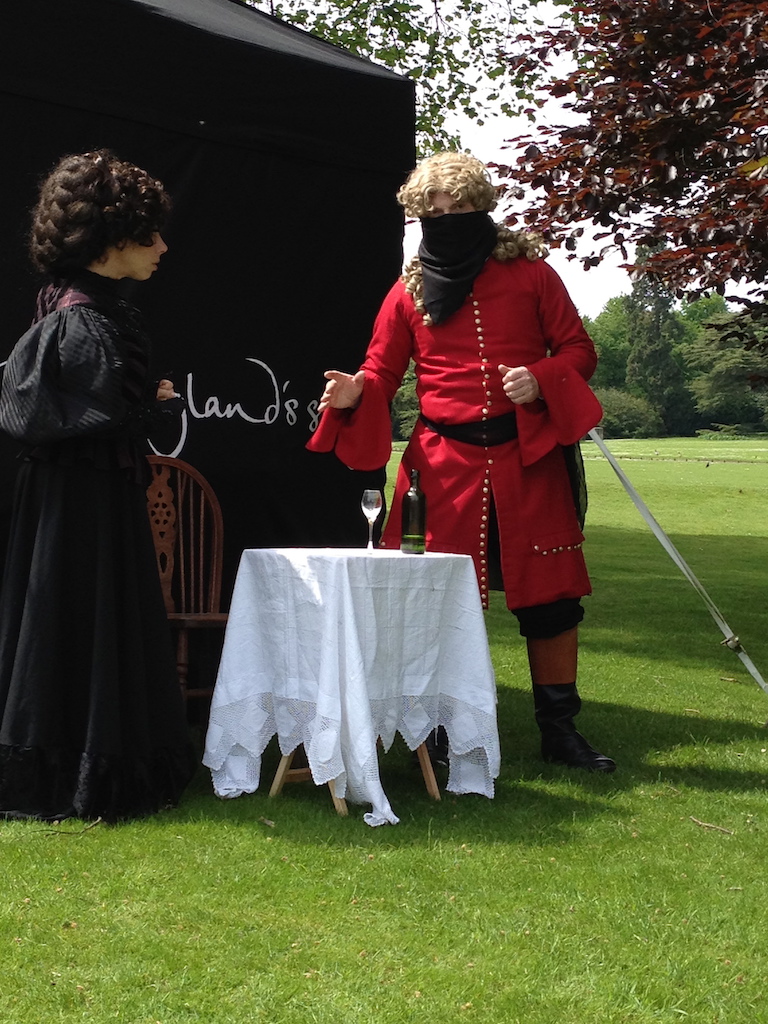 Commissioned by English Heritage for Audley End House, this comic two hander explored the reported sightings of ghosts at Audley End to tell the houses history through the supernatural inclinations of a not very psychic medium and her valet who desperately tries to recreate the spirits she is so convinced she can see.

We were invited to participate in the colleges Festival of Freedom, to perform not one, but four plays, three from our repertoire and one commissioned for the occasion! We performed Breaking the Chains,The Great Charter?, Deeds not Words, (Please see our other pages for details) and a new play, The Putney Debates. We were invited back a year later on a similar premise, to perform  more  plays from our repertoire, and a new piece on the Protestant martyr, Anne Askew. We imagined the end of King Henry the Eighth’s reign. Isolated in the private rooms of his palace with his fool Will, looking back on his life and being visited by Anne Askew, who could then tell her life story. The play stayed close to the historical truth of Anne’s life, but dealt with a number of difficult and emotive issues in a way that was friendly to the family audience, and still true to the historical events we were portraying. It also gave us an opportunity we always relish, to tell a story of somebody who deserves to be better known than they are.

Performed as a three hander with lots of audience participation, this 45 minute piece looked at the history of Whitby Abbey and associated tales, legends and myths, including St. Hilda and the snakes and The Hand of Glory. A family friendly, light-hearted piece, where the audience were the local amateur dramatic company, turned up to audition.