In 2007, we  were commissioned by English Heritage to create a play to commemorate the abolition of the British trans-Atlantic slave trade. This was a thorny subject, as it was not the end of the institution of slavery, just a milestone on the way to that goal. Much of the work being created was about William Wilberforce and his galvanising of the abolition movement. We wanted to find another story. We were fortunate to be invited to a meeting of the Hull Black History Group, which was pivotal to our research and the eventual finished product, as they saw the abolition from a completely different perspective. This was inspirational to us in our approach to future work. We wanted to look out for stories from history that had either not been told, or to take stories that were known, but view them from a different angle.

This three handed, half hour play, telling the story of the move to the Act of Abolition, is told through the intertwining narratives of three characters; a factory worker who discovers that the fruit of his labours is being used in the slave trade, a well born young lady looking for a cause to follow and her companion, who has direct experience of the slave trade. The play explores the issues of slavery and the part that various factions played in its eventual abolition, including the importance of slave rebellions. The story is partly told in the words and songs of the time, that were part of a nationwide campaign, one of the first of its kind, to bring the trade in kidnapped Africans to an end.

This play has been performed on tour for English Heritage and as part of Royal Holloway College Festival of Freedom. It is still as relevant today as it was when it was first performed, and is a timely reminder that the consequences of some things that we think have been consigned to the past are actually still with us today.

Audience response to Breaking the Chains has been generous and positive, despite the sensitive nature of the subject matter, which the play confronts without apology. We will always have a particular fondness for Breaking the Chains, as it was our first commission and the catalyst for our company. 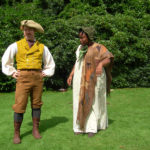 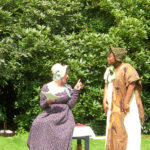