Of all the myths and legends that resonate through history, the stories of King Arthur have proved among the most enduring. To some they are a tantalising glimpse of a now lost history, to others an account of a chronological series of real events and to most of us a series of stories which we recognise even if we don’t know the details. That is the abiding power of legend and myth, to leave a trace in our consciousness that is like a shadow.

We were asked by English Heritage to create two plays to be performed on the at Tintagel Castle in a setting that already evokes the epic nature of legend. while we were there an archeological dig was unearthing evidence of the ancient structures built into the rocks. One of our stories took the foundation myth of King Arthur; the story of how Merlin, the enchanter used his skills to weave a situation where Uther Pendragon could spend a night with the Lady Igraine at Tintagel Castle and thus father the Once and Future King.

To this we added the story of Tristan and Isolde, also partly set at Tintagel. We asked our audience to think about the nature of storytelling and the truth of history as they continued their climb to the castle ruins.

The play ran for two seasons. When we were asked by The Royal Armouries in Leeds to create a series of scenarios on an Arthurian theme for a Christmas event in 2018 we already had some material in place. This was our fourth or fifth project with the Armouries in the last two years and having a feel for the audience we wanted to put together a set of scenarios that encouraged active participation among the younger members of the audience and food for thought for the older. It was our most successful event there to date and left us with a keen desire to continue to explore the Arthurian Myths.

We now have two plays; one about Merlin and his prophesies and one about the early life of King Arthur. We have tried to make them as interactive as possible, but also keeping the air of mystery and otherworldliness of the medieval stories. They are currently written in both three and four hand versions. 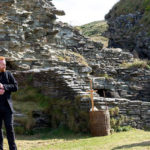 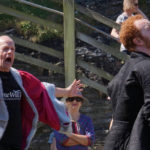