Time Will Tell Theatre were incredibly excited and honoured to be approached by the National Army Museum to help them create events to commemorate the events of the Great War. TWT have worked with the NAM on a variety of projects to bring the Great War to life.

We provided characters for school outreach days looking at the experiences of military and civilians in the drive to win the war. In 2014 we celebrated Folkstones role as a vital link in the supply of men and materials to the Western Front by creating a piece of street theatre performed outside an exhibition on the war. We returned in 2015 to commemorate Folkstone’s continuing role as a port, a military camp and a hospital town seen through the eyes of soldiers from Canada and India and local people. We also provided costumed hosts for a series of WW1 themed film nights. In 2016 we provided the actors for a film to stimulate debate in schools about the issue of conscription. Our team of actors recreated speeches by MPs for and against the suggestion of compelling young men to join up.

With the reopening of the refurbished National Army Museum Time Will Tell has provided costumed characters for school visits and family days always with the same aim; to bring the past to life and to share incredible stories of soldiers, nurses, munitionette and ordinary people in a way that entertains and inspires, but most of all connects us with a common past. Our characters often pop in the museum so keep an eye on our diary page for details. 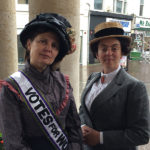 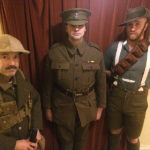 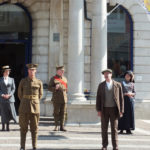 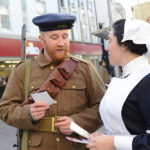