Quite why a fourth century Roman military officer and martyr to the Christian faith became the most important saint in England is a historical mystery. Just the sort of thing that TWT like to investigate! A little digging beneath the myth soon revealed a story with as many questions as answers.

Much of St. George’s early life is unknown and the available sources tell different versions of his origins. Is he from what is now Turkey, Israel or Syria? We get onto firmer ground as he gets older and the more familiar parts of his story emerge. He’s really two characters; the martyr who was tortured by the Roman Emperor Diocletian to give up his Christian faith and, more familiarly, the Dragon-slayer and maiden saver! But why did he become a patron saint to England? A country that didn’t exist when he was alive and that he certainly never visited or even knew of? A country furthermore that had two homegrown patron saints already.

This question was our starting off point. What is it that makes a saint special? What do you have to do? We invite our audience to find out as potential candidates for medieval sainthood under the careful mentoring of St. Margaret, famed for her experience with a dragon. On the way we meet St. Edmund the Martyr, English born freedom fighter and victim of Viking torture to give up his faith. A man with a real claim to be England’s patron saint. We tell the story of Margaret, Edmund and George in a sort of compare and contrast in which the audience – fellow candidates – play out the roles of marauding Viking hordes and the people of Silene, the town in Libya attacked by a dragon until a hero appears to save them! En route we explain what it takes to be a medieval saint, what is expected of you and the perks of the job. Fast paced and light-hearted but packed full of facts, our trademark style breathes new life into an old story and gets the audience involved in a story that we think we know, but it turns out to have a few unexpected twists 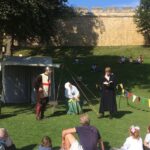 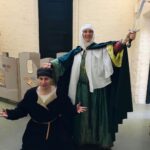 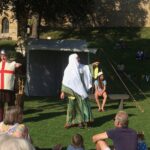 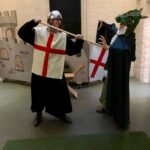